»Robertone« manufactures exclusive steel racing road bikes and takes the »... art of bicycle construction literally, creating racing machines that are not only fast, but above all beautiful.« The head badges we produce for these outstanding bicycles convey the corporate philosophy as metal brand ambassadors, perfectly suited for the world of bicycles.

Embossed, cast or manufactured with the latest laser and 3D technologies. Embellished with coloured enamels or manufactured in monochrome aluminium or brass. Complex shapes and surfaces are no problem, neither is the production of small or large bike head badge series. 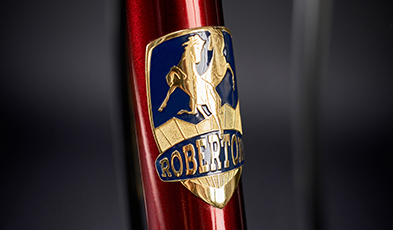 Bicycles were rarely equipped with emblems prior to 1896, making it difficult for enthusiasts and collectors to identify brands today. Often, decals were applied to the head tube or to the lower frame. Metal head badges only became popular in Europe from about 1896 onwards, with the onset of industrial mass production of bicycles. Embossed or etched metal emblems then quickly replaced the decals almost entirely, and high quality bikes were later also equipped with coloured enamelled emblems. During the crisis of the bicycle industry in the 1960s, these embossed bicycle emblems disappeared and were once more replaced by inexpensive stickers. With the new momentum cycling has gained in recent years, the metal head badge is now returning.